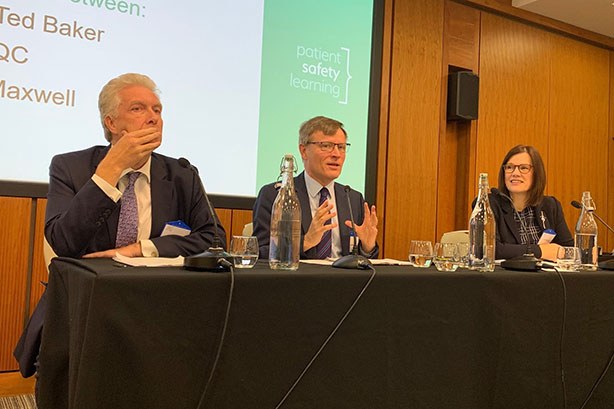 Patient Safety Learning held it's second annual conference on Wednesday 2 October, launching the hub and to issuing a call for action on patient safety; with inspiring and practical presentations on issues that can be addressed and ways to address them.

The theme of Patient Safety Learning’s second annual conference was set at the outset by Jonathan Hazan, chair of the board of trustees.

“Patient safety must become a core purpose of healthcare, not just one of its priorities, because priorities can be shuffled around,” he said while welcoming delegates to the King’s Fund in London. “That is one of the themes of A Blueprint for Action and of this conference.”

Launch of the hub

Helen Hughes, the chief executive of Patient Safety Learning, picked up the point. Almost 20 years have passed since the US Institute of Medicine published its ground-breaking report, To Err is Human, and the UK Department of Health followed up with An Organisation with a Memory.

Yet there are 11,000 people – or twice the capacity of the Albert Hall – that die avoidably in patient safety incidents every year. “We could have another 20 years of doing what we are doing [and it would not make the impact that is needed],” she said. “What we require is a move to action.

“So, we want to focus on good practice and experience. We want to design for safety and not just to prevent harm. What we have described in A Blueprint for Action is what good should look like.

“That means: safety is a core purpose; there are explicit standards for patient safety; all staff are qualified and experienced in safety; patients are seen as part of the team; there is a culture that prizes safety and learning; and that lessons can be applied quickly and easily.”

In support of this, Hughes went on to formally launch the hub; an online patient safety learning platform that has been designed with clinicians, patient safety experts and patients to act as a repository of good practice and to support a community through which people can share ideas.

“the hub is for everybody,” Hughes stressed. “Today is the launch, and now we want to hit the button and get people using it and sharing it.” #share4safety.

Change comes from the top

The rest of the event, which was attended by more than 150 people, focused on some of the persistent challenges in developing a culture of patient safety; and, importantly, ways to address them.

Because, as Dr Elaine Maxwell, clinical advisor, National Institute for Health Research, pointed out, echoing the opening comments, “there is a tendency to focus on what goes wrong, rather than on creating a system for safety.”

A key change, she argued, is that the complex system of the NHS “needs to operate in an open way” and “leaders need to support that.” Professor Ted Baker, the chief inspector of hospitals at the Care Quality Commission, agreed.

In comments picked up by the press present at the event, he said that while the CQC had seen improvements in many of the areas on which it assesses NHS trusts, “safety has not moved on.”

“There is a culture of compliance: ‘we do it because the CQC tells us to”, not ‘we do it because we have a safety culture’,” he said; adding this meant he still receives 500-600 ‘never events’ reports every year, most of them “very repetitive” in dealing with the same litany of errors.

However, in less reported comments, he argued that what needs to change is clear. Patients need to be involved and to be able to challenge the system. Staff need information and “to know what to do with it” – “which is why we need something like the hub” and “it could make a significant difference.”

And, there needs to be that change in culture, led from the top. Sir Stephen Moss, who was turnaround chair of the Mid Staffordshire NHS Foundation Trust, outlined what this would look like in a blog ahead of the event.

While Tom Kark QC, who was senior counsel to the Mid Staffs Inquiry, and who has just completed a review of the Fit and Proper Test for board members, outlined some practical steps that it has suggested to stop the “revolving door” through which failed directors and senior managers can sometimes pass.

As the Health Service Journal pointed out, these include the creation of a health directors standards council to investigate misconduct, and an end to ‘vanilla’ references.

However, Linda Kenwood, principal lecturer in nursing at the University of Cumbria, argued that the key is for leaders to guard against their necessary “confidence” slipping into “supremacy”, and to have the “humility” to include the patient perspective.

In another session on the ‘practical steps’ that can be taken to improve patient safety, Douglas Findlay, a learning and development specialist with the Oxford Academic Health Science Network and patient leader at Royal Berkshire NHS Foundation Trust, outlined what this might look like in practice.

“Leadership is vital, because what leaders do permeates the whole organisation,” he said. “Our new chief executive, who I love, says ‘the standards you walk past are the standards you accept’. Leaders need to be very clear about their beliefs and values and, most importantly, live them. Otherwise, people do not know what they are supposed to do, and what kind of people they should be.”

Dr Arun Chidambaram, Mersey Care’s operational medical director, said it was also important for clinicians to be open and to be able to speak up if they saw something going wrong. The trust has worked hard to create a just culture in which this can happen.

In a moving presentation from Jo Hughes, the founder of Mothers’ Instinct, the conference heard what can happen when culture is not open and the patient perspective is not taken into account.

Hughes set up Mothers’ Instinct after her 20-month-old daughter, Jasmine, died and she had to “put her grief on hold” while an inquiry and an inquest took place. “Jasmine died because of communications issues that allowed signs of her deterioration to be missed,” Hughes said.

“And that is a common factor for bereaved mums. Poor information flows lead to staff perceptions that are wrong, and that make us think as mums that we are wrong.

“Then, organisations do not help us with grief and with creating a legacy for our children. Instead, we are made to feel like our children’s lives do not matter. Our treatment in the aftermath of Jasmine’s death broke my heart all over again.”

Action against Medical Accidents also campaigns for patient safety and justice, an in another blog published ahead of the conference, chief executive Peter Walsh outlined what it thinks patient involvement at all levels should look like.

Back at the conference, Dr Matt Inada-Kim, a consultant in acute medicine at the Royal Hampshire County Hospital in Winchester and clinical lead for sepsis/deterioration in Wessex, outlined the practical steps that have been taken across the region to spot when patients are deteriorating and to make sure that it is communicated to clinical teams.

The National Early Warning Score , known as NEWS2, is now being used as a common language across care settings, he said; and the development of a shared care record, the Hampshire Health Record or Care and Health Information Exchange, has helped to make sure that people are aware of the score and its implications.

The potential of data was also the subject of a presentation by Alison Leary, professor of healthcare and workforce modelling at London South Bank University, who showed how data collected routinely from electronic patient records and systems such as the Datix incident reporting system, could be used to inform patient safety issues, such as staff numbers and skill mix.

However, she pointed out that staffing would look very different if the UK treated healthcare as a “safety critical industry” like the airline or oil industries – which is something that Norway does.

In a safety critical industry, she said, the most experienced staff are deployed to deal with the most stressful and difficult issues; while the least experienced do high volume, low risk work under guidance while they learn their jobs. That’s often not the case in the NHS, where junior doctors and staff just out of training are often the first in line.

The structural challenges to patient safety provided important background to a discussion on how it can be professionalised. Neal Jones, the assistant director of patient safety (human factors) at Royal Liverpool and Broadgreen University Hospitals NHS Trust, said there were four elements to professionalisation.

Ultimately, though, he argued: “It is not enough to train people to spot traps in our systems. We need to change the environment. Expecting people to compensate for inadequacies in that environment is just not acceptable.”

At the end of the day, Helen Hughes not only agreed, but said she hoped the conference would inspire the delegates and staff across the NHS to work with A Blueprint for Action and, of course, the hub. “The theme of the day has been that it is time to take action,” she said. “We have launched the hub to support staff, patients and everybody interested in patient safety in the UK. Now, we want people to use it, to contribute good practice, and to find out how they can embed this in their own organisations.”